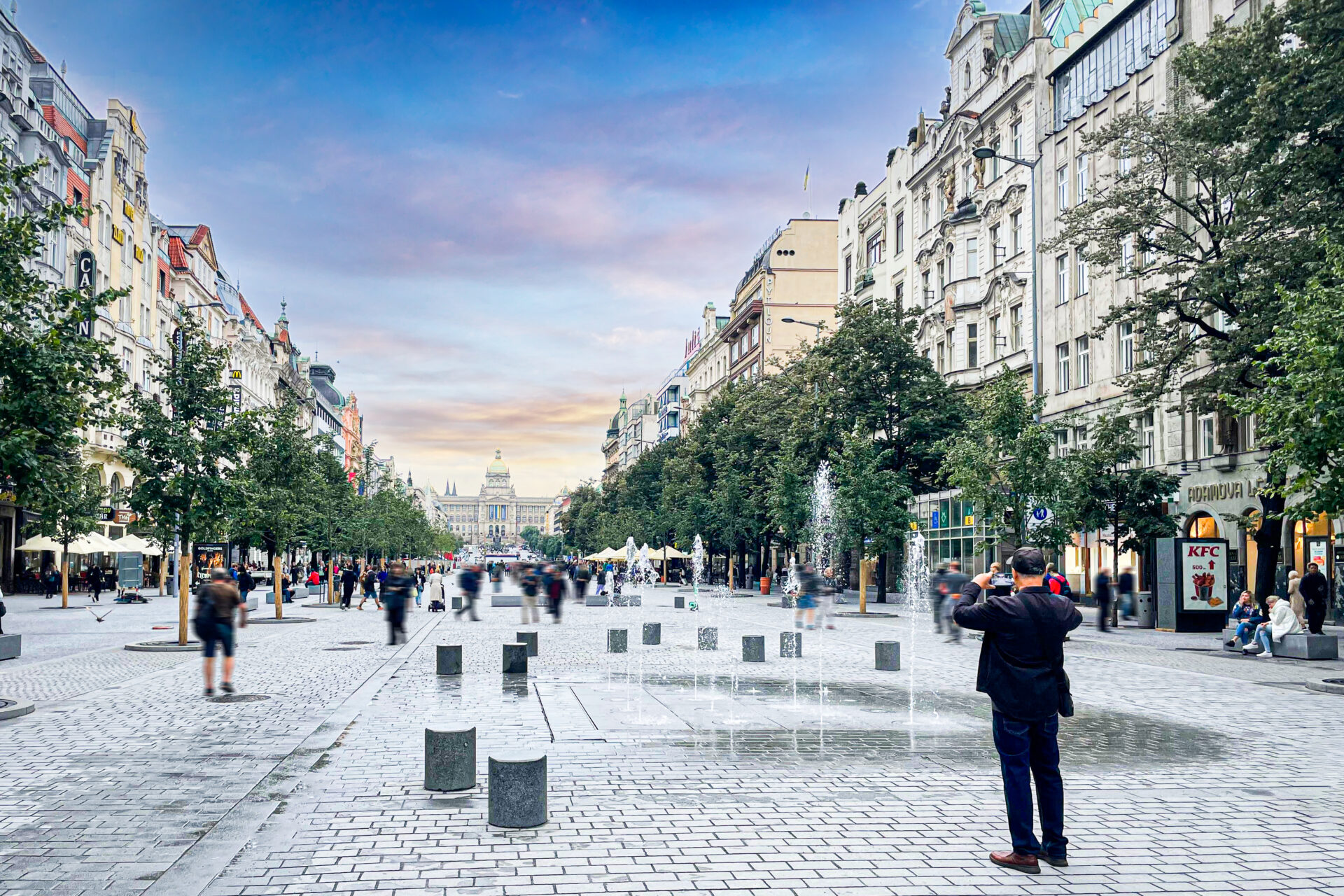 The first stage of the reconstruction of the lower part of Wenceslas Square in Prague was completed today, which is another important step towards improving this essential public space. Its ongoing transformation for the better is yielding results in the form of increased interest from major brands from the retail, gastronomy and service segments that are opening their establishments here. Attractiveness for occupiers and investors is on the rise.

Wenceslas Square is the most important public space in the Czech Republic, serving residents and visitors alike for gatherings, celebrations, demonstrations, entertainment and shopping – at 750 metres long and 60 metres wide, it is the largest shopping, cultural and entertainment area in the city centre. It also has the largest movement of people, which puts a huge strain on it and necessitates constant maintenance, attention and revitalisation. After the first phase of revitalisation which has just ended, it is becoming a more welcoming and beautiful place for tourists and residents alike.

Jan Kotrbáček, partner and head of the retail leasing team for Central and Eastern Europe, Cushman & Wakefield, and chairman of the Association for the New Town of Prague: “Wenceslas Square has been undergoing a positive change in recent years, with this long-standing attractive destination becoming an even more sought-after and attractive place for both visitors and retail and service operators. For them, the square is one of the most attractive locations within the Prague high street and their demand for space to let in this area is growing. We also see a great interest of investors in this representative address.”

Existing brands on Wenceslas Square are repeatedly renewing their leases, while new ones are coming in. Recently, A3 Sport, for example, confirmed its stay at the site, as the chain’s flagship store for the whole of the Czech Republic and Slovakia will be transformed into a new concept called Sport Vision. A new store for the fashion brand Tezenis has been added to Wenceslas Square, a jewellery store for Beny and Pandora is about to open, and another major brand has signed a contract, but has not yet announced the identity of the upcoming store. Bageterie Boulevard has recently been added to the range of gastronomic concepts. At the bottom of the square, on 28. října Street, Pilsner Urquell will open The Original Beer Experience in an area of over 3,600 sqm.

Jan Kotrbáček, partner and head of the retail leasing team for Central and Eastern Europe, Cushman & Wakefield, and chairman of Association for the New Town of Prague: “Overall, Wenceslas Square is moving in the right direction, the improved environment is attracting major brands, which in turn will attract other quality tenants thanks to the customers they bring to the location, as happened in the upper part of the square after the arrival of Primark.”

Primark opened its first and largest city centre store in CEE in the refurbished The Flow Building last July, becoming one of the catalysts for the transformation of the whole site with its arrival. Not only has the fashion brand enriched the local offer and made the environment more attractive, but it has also made the upper part of Wenceslas Square a destination that attracts many visitors. This is confirmed by data from other retailers or café and restaurant operators in the area, whose customer mix has changed: they now include more young people, women and families with children. In response to these changes, retailers have increased their interest in retail space in the area, and other brands (e.g. Tezenis) have opened stores in the area.

The value of real estate on Wenceslas Square is growing

Wenceslas Square is one of the top destinations on Prague’s and the Czech Republic’s “high street”, a retail category comprising the main shopping avenues in city centres. 36 million people pass through it annually, with 70,000 sqm of retail space available in two hundred stores. Fashion brands in particular have their stores here, but there are also bookstores, toy stores and a number of gastronomic and cultural concepts.

The square and its surroundings are also a popular place for the business community. This is why it is often chosen as the headquarters of major local and international companies. For example, companies such as Wilsons have recently opened their offices on Wenceslas Square, and Scott.Weber coworking has a branch here.

Jan Kotrbáček, partner and head of the retail leasing team for Central and Eastern Europe, Cushman & Wakefield, and chairman of the Association for the New Town of Prague: “Retail tenants are well aware of the potential of the square, which is a great location for targeting mass consumers due to the high footfall from locals and foreign tourists. At the same time, the representativeness of the site and the buildings with large areas and often interesting architecture make it an excellent location for a flagship store for the brand.”

At the same time, as the quality and overall standard of the site increases, the value of these properties to owners and potential investors is also increasing. Significant buildings, which have improved for the better in the two decades, are for example, the aforementioned The Flow Building (VN 47), Europalace (VN 2), The Forum (VN 19), Van Graaf (VN 17) and others. Plans are also underway to renovate Wenceslas Square 30, to modernise Wenceslas Square 62 and to complete the renovation of Hotel Evropa (VN 25).

This redevelopment of existing buildings or the completion of missing parts of blocks is a major catalyst for transformation for the better – along with the ongoing revitalisation of public space. Currently, the first of two phases has been completed, redeveloping the lower part between the intersection of Jindřišská and Vodičkova Streets to Na Příkopě Street, where a pedestrian zone has been created. By reducing traffic, a more pleasant and representative space is being created. During the repairs, the tree planting is also being renewed and new trees are being planted. Retention basins are to be built below the top part of the square to help with irrigation and relieve the sewer system.

Monika Vlková, project manager of the Association for the New Town of Prague: “We consider the just completed stage of the reconstruction of the square to be an important step towards the modernisation of the heart of the centre of Prague. The Association for the New Town of Prague is, among other things, the official coordinator of the management of the public space on Wenceslas Square, Na Příkopě street and 28. října street. We are fully aware of the importance of Wenceslas Square and we are very happy that our activities contribute to the fact that the inhabitants of the metropolis like to return to it. Whether it is the reintroduction of wet cleaning, ensuring more frequent waste collection, new benches, modernising visual elements in the streets or continuous monitoring of all processes. This is the only way Wenceslas Square and its surroundings can move in the right direction – forward.”

Wenceslas Square will be made more attractive by the revitalisation of its upper part, where a very successful reconstruction of the National Museum has already taken place, a connection to the newly reconstructed Main Railway Station and revitalised areas around it is being planned, and a better connection to Vinohrady. In the lower part, Wenceslas Square and the surrounding area will be connected by the planned multifunctional project Savarin by the developer Crestyl, which will be the catalyst to the area.

Jan Kotrbáček, partner and head of the retail leasing team for Central and Eastern Europe, Cushman & Wakefield, and chairman of Association for the New Town of Prague: “The Savarin project will connect Wenceslas Square in its lower part with Na Příkopě, Jindřišská and Panská streets, referring to the tradition of Wenceslas arcades. This involves the careful reconstruction of existing historic buildings and the creation of a completely new public space with greenery, open space in the courtyard and commercial areas. This honours the traditional Prague urban layout, where different sized streets, squares, courtyards or parks are linked together to form a harmonious whole. The project also envisages the placement of the Slav Epic of Alfons Mucha.”

Wenceslas Square thus has a very promising future and an ever-increasing attractiveness for residents, visitors and other users of the area.