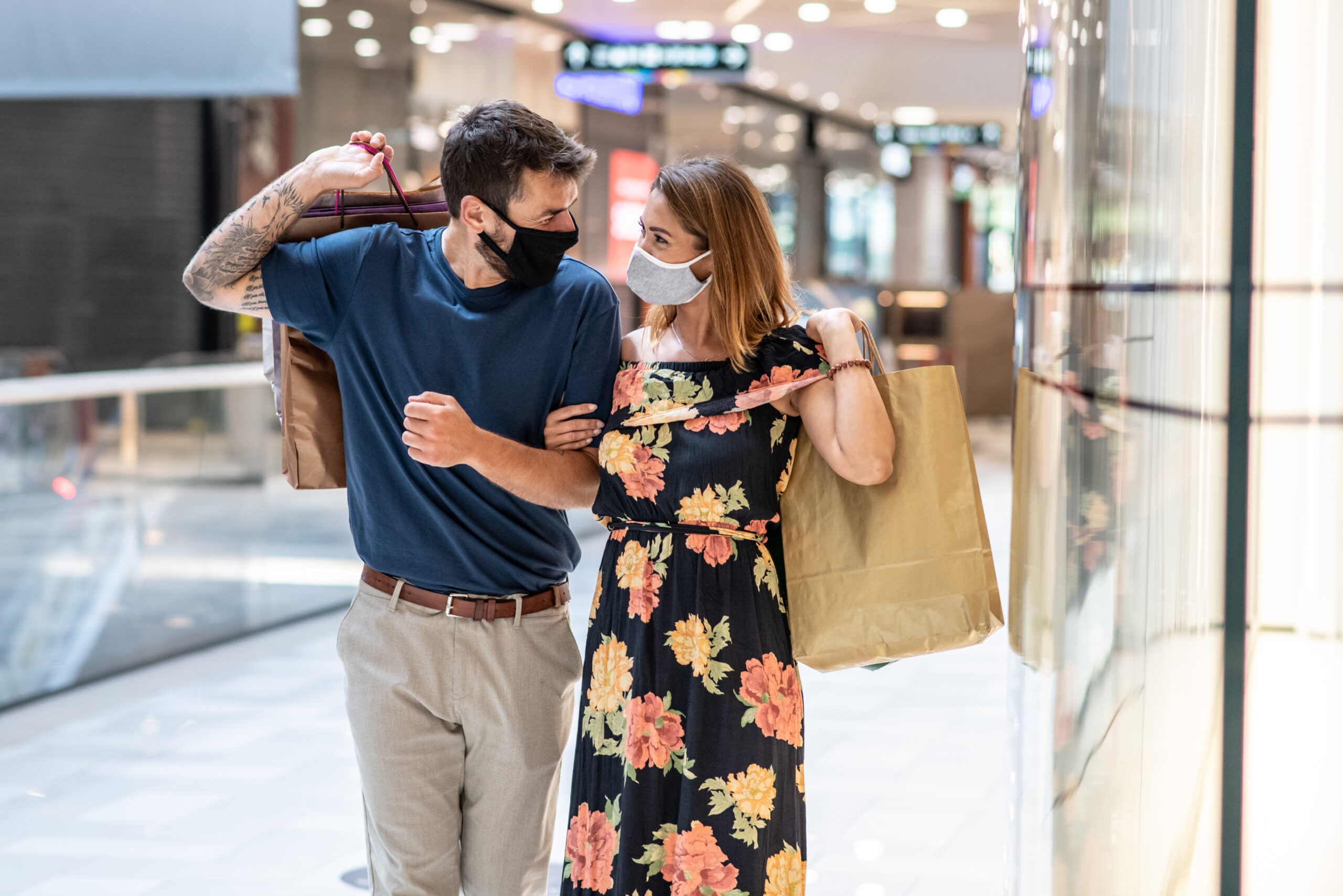 Following their reopening in May, shopping centres have seen both their revenue[1] and footfall increase to a rate exceeding the performance during the same period last year. The footfall was lower than in the pre-crisis year 2019, but the revenue was comparable; in fact, it was slightly higher. Supermarkets and hypermarkets fare the best in terms of revenue; electronics and health and beauty products are also doing well. The current performance of shopping centres can therefore be described as very strong, with figures exceeding initial expectations, and investors show renewed interest in properties again, with several major retail transactions being planned for this year and the next. To date, office and logistics properties have been selling the best this year.

The data about shopping centres’ performance available to Cushman & Wakefield (related primarily to smaller to medium-sized centres in Czech regions) show a positive trend: following their reopening, shopping centres have experienced growing revenue and footfall. Even though all shops opened only after the first decade of May, the footfall in May was 31 per cent higher than in May 2020, and revenue was a full 55 per cent higher. The June footfall and revenue were 6 and 18 per cent higher year-on-year, respectively. This is definitely good news for the entire retail market – the initial concerns that the brick-and-mortar retail segment would not survive the coronavirus crisis failed to materialise.

Jan Kotrbáček, Partner & Head of CEE Retail Agency team, Cushman & Wakefield: “It seems that the effect of delayed consumption is making itself felt in recent months, with many consumers itching to go shopping to shopping centres. At the same time, the current situation makes travelling abroad complicated, so many of those who would leave the country for holidays are staying in the Czech Republic, and thus spending their money there. With that said, we should differentiate between the various types and locations of retail projects: in our portfolio, we see great differences, mainly between smaller regional projects and larger schemes, also those in Prague’s city centre, that depend to some extent on international tourism, which still has not returned to pre-pandemic levels.”

However, visitors tend to spend somewhat more for their shopping there than they did before the crisis: compared with the revenue two years ago, revenue was 4% higher this May and 2% higher this June.

Not all types of shops in shopping centres perform equally well, but while some are not yet achieving pre-crisis levels of revenue, many actually are.

The pandemic had a positive effect on supermarket and hypermarket revenues – they were markedly higher in all of the first six months of this year than in the same period of the pre-crisis year 2019.

Health and beauty product retailers also report positive figures – an increase of 10 and 15 per cent, respectively.

Revenue in the fashion and shoe segment started to grow immediately after the reopening – by 21 per cent in May, although June was weaker compared with 2019 with a revenue 10 per cent lower.

By contrast, the revenue in the personal services segment and in cafés and restaurants within shopping centres still remained below pre-crisis levels in May, growing however in June by 27 and 1 per cent, respectively.

This confirmation of this part of the retail market’s resilience and good performance is an important sign also for real estate investors, who are showing a renewed interest in shopping centres and retail parks after a period of hesitation and uncertainty.

Michal Soták, Partner, Head of the Capital Markets team in the Czech Republic, Cushman & Wakefield: “Shopping centres‘ performance after partial lifting of Covid-related restrictions has been stronger than general market expectations. This, coupled with favourable pricing, means that western investors are starting to be interested in CEE’s shopping centres after a pause of Covid-related uncertainty. Investing into food store assets is of particular interest among investors of all types.”

The interest in retail on the part of investors is evidenced by the 11 retail project deals completed since the beginning of this year. A large portion of those consisted in the sales of retail parks, which were the most resilient face to face the coronavirus crisis, but a major shopping centre deal also took place: Bluehouse sold the Korso Karviná shopping centre with Cushman & Wakefield serving as consultant.

We should see several more shopping centre sales in the Czech Republic this year and investment activity in this segment should increase further next year.

Investments in commercial real properties totalled EUR 678 million in the first half of this year, which is one-fifth more than in the same period last year. Cushman & Wakefield expects that by the end of 2021 total investments will amount to about one and a half billion Euros, which is more than last year’s total, yet markedly less than in the years before the coronavirus pandemic.

Michal Soták, Partner, Head of the Capital Markets team in the Czech Republic, Cushman & Wakefield: “After a period of waiting, investors are now optimistic about the economic rejuvenation and have a backlog of unspent capital to deploy on the market. Transaction activity in the Czech Republic is however low; there is a shortage of suitable properties for sale on the local market, partially due to development being low across sectors; and a mismatch between what the capital is targeting and what is available.”

Table 3: Investment activity on the commercial real estate market in the Czech Republic, in millions of Euro

In the first half of the year, investors spent the most on offices whose part in the total amount invested was exactly one half. The number of office transactions was also the highest at 12; the most important included the sale of several office schemes in Prague (Parkview, Avenir Business Park and Explora Business Centre), Ostrava (Nová Karolina Park) and Brno (Platinium).

Michal Soták, Partner, Head of the Capital Markets team in the Czech Republic, Cushman & Wakefield: “Prague offices are targeted by Czech and regional buyers and their pricing and liquidity is stable. Prague is an undersupplied market that went into the Covid situation with record low vacancy, therefore it is expected to weather any dip in demand very well.”

Almost one-fifth of the total investments in the first half of this year were channelled into industrial properties that continue to enjoy a great interest among investors.

Michal Soták, Partner, Head of the Capital Markets team in the Czech Republic, Cushman & Wakefield: “Logistics assets remain highly sought-after, particularly the ones that benefit from the boom in F&B e-commerce, i.e. urban logistics projects. Their supply is very limited.”

Investments in hospitality accounted for 16 per cent of the total amount; this segment witnessed one of the biggest transactions of the first half of 2021 with the sale of the W Hotel Evropa in Prague. Investors approach hospitality properties – and high-street projects in Prague in general – case by case, but the sentiment is positive in the mid-term perspective.

The Czech Republic is the target for domestic investors and CEE’s No.2

Domestic investors accounted for the largest share of buyers in local transactions in 2021 with 43%, focusing primarily on offices and retail parks. German investors came second with a 13% share, followed by Israelis and Singaporeans.

Czechia was investors’ second choice in Central Europe (Czech Republic, Slovakia, Poland, Hungary and Romania). Out of the total amount invested in the region, which was EUR 3.7 billion, one half was directed to Poland and almost one-fifth to the Czech Republic. Compared with the first half of last year, investments in the region were one-fourth lower, although Czechia saw a 20% increase at a time when the other countries, except for Slovakia, experienced a significant decrease.

[1]    For the purpose of this comparison, revenues achieved in shopping centres do not include supermarket and hypermarket revenue, since those establishments had not been closed due to the pandemic.